This is the message the so-called Raphael killer leaves on each of his victims. A clue – and a reminder – that three decades later they’re still at large.

When investigative journalist Oonagh O’Neil is given a tip off about one of the biggest tragedies to hit the NHS, the tainted blood scandal, she can’t help but spot that the two seemingly different events could be linked.

People were dying at the hands of those who were meant to save them and with a scandal this huge, those responsible will stop at nothing to keep it quiet…

Could Oonagh be the key to piecing together the web of lies in order to catch the killer?

Authentic and gritty, Keep Her Silent is a gripping and page-turning thriller that will leave you breathless. Perfect for fans of Susie Steiner, and Karin Slaughter, Patricia Gibney.

What people are saying about Theresa Talbot:

‘In Oonagh O’Neil, the author has created a fascinating, flesh and blood character. Someone who pops from the page and someone, dare I say it, who would be great fun to go for a drink with’ Crimesquad.com.

‘Theresa Talbot does not shirk away from confronting the unsettling subject matter and [this] is a compelling story as a result’ http://www.grabthisbook.net.

‘A good mystery with many unexpected twists … It keeps you turning pages the whole time’ Cynthia Moskal, NetGalley.

‘Too often I’ve read “thrillers” that didn’t really thrill. This book has it all, plenty of story line and plenty of detail’ Margaret Leonard, NetGalley.

‘A must-read for anyone who loves detective crime thrillers based loosely on true events’ Linda Tilling, NetGalley.

‘A clever and well-written novel based on harrowing true experiences’ Donna Bradley, NetGalley.

‘A very good read and I would certainly recommend it’ Mary Picken, NetGalley.

‘The premise is truly horrific […] but the plot is sensitively handled and hopeful. I will read more by this author’ Emma Ounsworth, NetGalley.

Theresa Talbot is a freelance writer, journalist and radio presenter, perhaps best known as the voice of Traffic and Travel on BBC Radio Scotland and as the host of The Beechgrove Potting Shed. Prior to working with the BBC she was with Radio Clyde and the AA Roadwatch team. Theresa worked in various roles before entering the media as an assistant in children’s homes, a Pepsi Challenge girl and a library assistant. She ended up at the BBC because of an eavesdropped conversation on a no.66 bus in Glasgow. Her passions include rescuing chickens, gardening, music and yoga.

Keep Her Silent has 2 central plots – the unsolved Raphael Killings from 1978, and The Tainted Blood Scandal. As a journalist I’m always squirreling away ideas from real life crimes, but my interest lies in those crimes committed by the establishment, in the full glare of the public – mainly crimes that no-one will ever be convicted of. The Tainted Blood Scandal is such a crime. It’s been described as the ‘worst treatment disaster in the history of the NHS’ (Sir Robert Winston) but to me it’s more than a scandal – it’s criminal. For those of you unfamiliar with the background, thousands of people in the 1970s & 80s (mainly haemophiliacs) were given blood clotting products contaminated with Hep C & HIV (before HIV was even known about). Initially it was assumed this was just bad luck –a tragic consequence of a new product designed to save lives. But it has since become apparent that the blood was infected as it was taken from prisoners, drug addicts, sex works – all of whom were paid for their donations. There’s even one Canadian pharmaceutical l company who has since admitted they took the blood from Russian corpses and passed it off as being from living donors in Scandanavia. The more I researched this, the more horrors unfolded.

I wish I could say was all very ‘Stephen King like’ and pour a glass of my favourite wine etc… but the truth is I never really know when a book is finished!! I send the first draft off to my editor/publisher who comes back with lots of lovely things to say – before telling me what needs to be changed. I then keep editing and we send the MS back and forth until we’re all happy with it. With Keep Her Silent I sent back a draft and waited for the next round of edits… they never came – it was only after a few emails I realised that the team at Aria had given it the thumbs up and it was indeed finished and ready for publication. So in answer to your question… no!

I’ve not read as much as I should have this year, I’ve been so busy writing – but my favourite so far is Douglas Skelton’s ‘The Janus Run’ I was lucky enough to get an advanced copy – it should be on the shelves soon. Reserve yourself a copy. You won’t be disappointed.

This picture was taken in September 1958. It’s the front page of The Daily Record – it shows a young girl fleeing from the Glasgow Magdalene Institution – a home for ‘fallen women’. The girls all aged between 15  – 19 staged a breakout.  Each time they escaped the police would round them back up – then they broke out again. Not one of the girls had committed a crime, or had been convicted of anything which necessitated their incarceration – yet the police had full powers to ensure they weren’t allowed their freedom. It was this picture that inspired my first crime novel ‘The Lost Children’

This is a hard one – let me think. Probably the first one would have to be The Magus, by John Fowles. Set on a fictional Greek Island of Phraxos, I was given the book before a holiday to Greece 25 years ago. I was on a deserted beach on the tiny little island of Spetses reading a description of the local area – I looked up and suddenly recognised the building off the side of the road. I was on the very spot, of the very island that Fowles had used for his setting (he’d changed the name of the island which is why I had no idea it was the same one) The book is over 600 pages long. I was on that island for one day – I always felt it was such a huge coincidence that I was on that very spot reading that very page at just the right time. It’s also a cracking book. 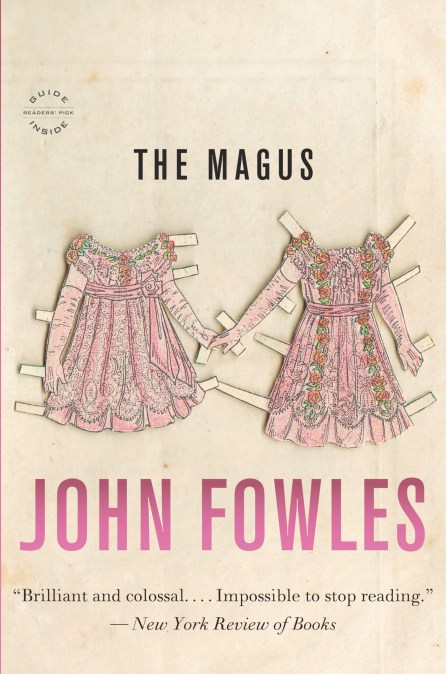 Another is Denise Mina’s Garnethill. It was the first crime book I’d read set in Glasgow – that inspired me to write crime set in my hometown. I see Denise often now at book festivals etc – she even gave me a blurb for my first book.

And last but not least has to be a collection of short stories by Hans Christian Andersen. I really struggled to read as a child – or least I thought I did. I could make sense of the letters and words but just couldn’t imagine ever sitting down to read for pleasure. My older siblings devoured Enid Blyton and gorged themselves on tales of the Famous Five etc, and I’m afraid they just left me cold. I felt a bit mortified that I didn’t like books  – until one day I bought a book at a jumble sale. I couldn’t have been more than 8, but, already showing signs of being shallow, I bought it because it was bound in fabulous green leather, with (what I’d called) curly writing on the front. I dipped in, not expecting to read more than a few lines, and suddenly I was hooked. I lost myself in a world of Snow Queens, Little Match Girls, Little Mermaids and other little things I can’t quite recall at this moment. But anyway, I remember thinking ‘stuff Enid Blyton and Timmy the Dog…these are real stories.’ Crikey – The obvious one would be ‘Tainted Blood’.. but the Gloria Jones version. Otherwise ‘Cry Me a River?’ Or maybe something sad by Billie Holiday …Body & Soul?.

If my book was made into a movie they could get Kid Creole and the Coconuts to play the lead – I wouldn’t care, I’d be too excited to argue!

Mmmm – female lead characters – do you mind if they’re a bit flawed? Or do you expect them to be all round and wholesome?

Thank you for what you are about to do…breath life into these characters that I’ve worked with for the past two years.