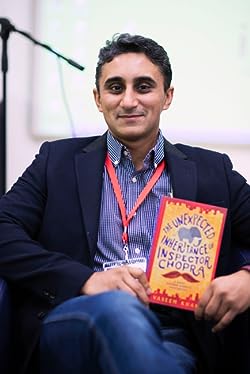 Vaseem Khan first saw an elephant lumbering down the middle of the road in 1997 when he arrived in the city of Mumbai, India to work as a management consultant. This surreal sight inspired his Baby Ganesh Agency series of ‘gritty cosy crime’ novels. His aim with the series is to take readers on a journey to the heart of modern India.

His first book THE UNEXPECTED INHERITANCE OF INSPECTOR CHOPRA was a Times Bestseller and an Amazon Best Debut. The second in the series THE PERPLEXING THEFT OF THE JEWEL IN THE CROWN won the 2017 Shamus Award for Best Original Private Investigator Paperback. The third was released in May 2017 – THE STRANGE DISAPPEARANCE OF A BOLLYWOOD STAR.

Vaseem was born in London in 1973, studied finance at the London School of Economics, before spending a decade on the subcontinent. He returned to the UK in 2006 and has since worked at University College London for the Department of Security and Crime Science. Elephants are third on his list of passions, first and second being great literature and cricket, not always in that order.

For more information about the world of the series please visit vaseemkhan.com where you can also keep abreast of Vaseem’s latest goings-on, competitions, events, and extracts from upcoming books via The Reading Elephant Book Club.

Favourite Character – Which of yours do you love writing about most and why?
by Vaseem Khan, author the Baby Ganesh Detective Agency series

Most people automatically assume that I have the most fun writing about Ganesha,
the one-year-old baby elephant that accompanies my lead character Inspector Ashwin
Chopra. Although it’s fair to say I’ve derived a great deal of satisfaction from creating such a unique sidekick – and the humour in my novels comes largely from the relationship that springs up between Ganesha and Chopra – the truth is that for me Ganesha is more of ametaphor for India, a living symbol of the subcontinent.
The character that truly breathes life into my novels (and to the India that I recreate in
them) is Chopra. Chopra is a man of his age. He has spent 30 years as a policeman in the city of Mumbai – India’s “city of dreams” – and has seen the light and dark and everything in between. In my first book The Unexpected Inheritance of Inspector Chopra, he is forced into early retirement – he is only in his late forties – and finds himself suddenly bereft of the purpose to which he has dedicated his whole life: justice.
In India the police service is known for being corrupt or incompetent.

For this reason,I deliberately created Chopra as a resolutely honest man, a pillar of integrity in this great sea of venality. His commitment to justice is particular acute because in India those with wealth or influence can often escape the consequences of their actions. In that first novel Chopra, after retiring, continues to investigate the death of a poor boy even after being told to drop the case by his senior officer. He does this because the boy’s mother suggests that because of their poverty the authorities simply do not care.
Chopra cares. He cares deeply about the social ills and inequalities in his country – and in modern India, poised on the cusp of becoming a global superpower, there are still social ills aplenty. I spent ten wonderful years on the subcontinent, but it wasn’t until I had been there a while that I was able to set aside my rose-tinted spectacles and take a closer look at the underlying fabric of the society I saw around me. Mumbai is India’s wealthiest and most glamorous city. It is home to the world’s costliest private residence – a $1billion tower owned by India’s richest man – but a little way down the road is a slum where families live five or six to a single-room dwelling. These vast inequalities bothered me, and they bother Chopra.
Yet this tension between new India – an India of wealth and westernisation – and old
India – of poverty, caste prejudice, and (occasionally) religious turmoil – provides a dynamic backdrop for me as a writer. Readers and reviewers alike have responded positively to the fact that I am willing to showcase India as it really is, and not the all-singing all-dancing exotic locale we sometimes depict it as in western fiction. (My favourite endorsement comes from The Sunday Express’s Jake Kerridge: “Khan has the quirkiness and hint of grit to make his portrayal of modern Mumbai memorable”.)
Chopra is also different from many western detectives in that he is no hard-drinking,
chimney-smoking, thrice-divorced maverick. He has been with his wife (known to all as
Poppy) for twenty-four years. They are childless in a country where this is often automatic grounds for a man to abandon his marriage – but Chopra and Poppy have used adversity to forge an unbreakable bond.
With each book in the series I learn something new about Chopra – but what remains
constant is that unblemished and unshakeable integrity. With the conceit of most writers, I like to think that in many ways he reflects me – his hatred of ginger, his love of cricket, and most crucially, that dedication to the righteous cause.
And, of course, his love of elephants.

For a century the iconic Grand Raj Palace Hotel has welcomed the world’s elite. From film stars to foreign dignitaries, anyone who is anyone stays at the Grand Raj.

The last thing the venerable old hotel needs is a murder…

When American billionaire Hollis Burbank is found dead – the day after buying India’s most expensive painting – the authorities are keen to label it a suicide. But the man in charge of the investigation is not so sure. Chopra is called in – and discovers a hotel full of people with a reason to want Burbank dead.

Accompanied by his sidekick, baby elephant Ganesha, Chopra navigates his way through the palatial building, a journey that leads him steadily to a killer, and into the heart of darkness . . .