After You By Jojo Moyes ~ Review

People always say that the book is better than the movie. While generally, this is the case, it isn’t always so, in my opinion.  Me Before You is one of the movies that I preferred over the book. The book has a slightly darker side that they leave out of the movie, one I would rather not have known. The movie also has Sam Claflin, need I say more. Actually, I truly loved Emilia Clarke in the role as Lou as well. She made the character real for me and I’m not sure I could ever have conjured her as well. Even if you have seen the movie, you are going to want to read the novel prior to picking up the sequel, After You. If you have looked at the title you will know, no spoiler necessary, that this book is about Louisa Clark moving on. Jojo Moyes does an excellent job writing a new story with a new set of characters while leaving you still attached to the old one. This doesn’t feel like a sequel for sequel sake. We needed closure, not that (as you learn) there ever truly is such a thing. I miss Will. I think I will always miss Will. And I miss the Lou that blossomed because of Will. If there is one thing I truly disliked about this book, it is that Lou feels like a much smaller character than she was in Me Before You. I felt, in that book, as unconfident and clumsy as she was, she was a larger than life clumsy. In After You, perhaps on purpose from the author, Lou has been made into a shell of her former self. It never felt like that bit resolved.

Hence, there is a third book coming out. Jojo Moyes recently announced a third book will be released. Speaking about the upcoming book, she said, “I always knew that once I committed to write the sequel to Me Before You I would also write a third book; I saw it quite clearly as a trilogy.” There is definitely room for a trilogy here and so, Ms Moyes, get writing. If you don’t feel you can commit to a third in the series, no worries. After You stands by itself, and at least one of the characters, Lily, is one that is worth getting to know. 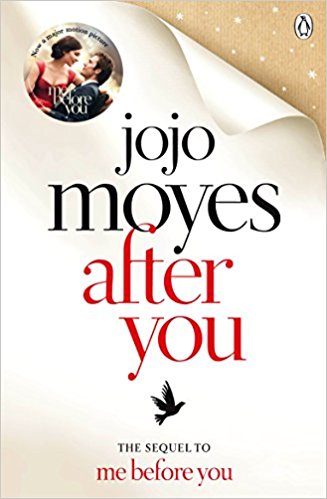 When one story ends, another begins.

How do you move on after losing the person you loved? How do you build a life worth living? Louisa Clark is no longer just an ordinary girl living an ordinary life. After the transformative six months spent with Will Traynor, she is struggling without him. When an extraordinary accident forces Lou to return home to her family, she can’t help but feel she’s right back where she started. Her body heals, but Lou herself knows that she needs to be kick-started back to life. Which is how she ends up in a church basement with the members of the Moving On support group, who share insights, laughter, frustrations, and terrible cookies. They will also lead her to the strong, capable Sam Fielding—the paramedic, whose business is life and death, and the one man who might be able to understand her. Then a figure from Will’s past appears and hijacks all her plans, propelling her into a very different future. . . . For Lou Clark, life after Will Traynor means learning to fall in love again, with all the risks that brings. But here Jojo Moyes gives us two families, as real as our own, whose joys and sorrows will touch you deeply, and where both changes and surprises await. After You is quintessential Jojo Moyes—a novel that will make you laugh, cry, and rejoice at being back in the world she creates. Here she does what few novelists can do—revisits beloved characters and takes them to places neither they nor we ever expected.

For a sneak peek and to order, click the links below.

Check out our Twitter page this week for an awesome international giveaway from author David Videcette.  Head over to ~ Twitter and check out the pinned post!
INTERNATIONAL Giveaway!

Enjoyed Love Books Group Blog? Connect with us here too: